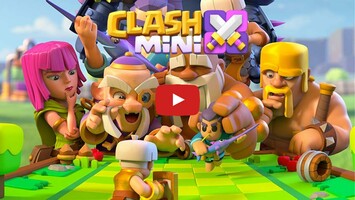 Advertisement
Clash Mini is a strategy game that gives you the chance to take part in battles featuring the famous characters from the Clash universe. However, in this title, you'll find tiny versions of the warriors for you to place around the grid on the screen.

In Clash Mini, you'll need to place all the members of your team on the board strategically to face your rivals. You'll need to create balanced lines of attack and defense to do as much damage as possible to the enemy squadron on each turn. Once you've marked the position of the small warriors, you'll tap the combat button and see if your chosen strategy is successful or not.

The graphics in Clash Mini lets you watch each battle play out in 3D from a top-down perspective. With a vertical orientation, the unlocked heroes are always available at the bottom of the screen. This way you will always have the option of adjusting your strategies to cause as much damage as possible to your opponents on each turn. Plus, as you play, you'll get new resources and attacks that you'll be able to use throughout each level.

Clash Mini brings you the essence of Supercell's Clash universe, but with different representations of the characters. With a miniature appearance, you'll need to place these adorable characters on the board wisely in order to win each battle. If you're successful, you'll be able to beat players from all around the world as you strengthen your groups of heroes.
Reviewed by Carlos Martínez
Advertisement

Why is this app published on Uptodown?
(More information)

They took money from me and don't give me the game, no one can carry it, they just steal you

It won't let me install it

GameKids2 Free
Let your kids learn with this collection of games
Sportskeeda
All the latest sports news and scores
ALKASS
BBF
Follow Belgian soccer matches with this app
Heads Up!
Put your phone on your forehead and play
The Seven Deadly Sins: Grand Cross (JP)
Spectacular RPG action set in the realm of the Seven Deadly Sins
Paper Fold
Fold the paper to release objects
Paint By Number
Color drawings by following the numbers